“Eat up, fatty!” – the fries thudded against my side and splattered me in a slimy film of ketchup. Blinking back tears, I assured my friends that I was in fact okay and that my coat was getting old anyway.

In fact, this act of hate – and it was an act of hate – was something that would stay with me for a long time.  For what had provoked this car full of gaggling men to throw their uneaten fries at me from a moving car, jeering as they went?  Why did they feel the need to tarnish my memories? To them, I was rubbish and I was as disposable as their leftovers, all because of the size of my body.

Growing up plus-sized was no easy feat.  Each day was plagued with a different task to overcome: shopping in stores with my straight-sized friends; selecting the right outfit so that I blended in seamlessly; having a crush that was always unrequited; concerning myself with my public eating habits or even having strangers throw food at me from a passing car.  There wasn’t a day that I didn’t feel judged by society, or worse, invisible. 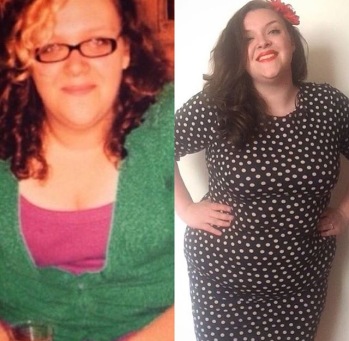 Thank goodness then, for the body positive movement.

The fat activism movement dates back to the late 1960s, but it has only gained popularity and a mainstream interest in the last three years or so – better late than never, right? *eye roll*

Pre-dating my recognition of the body positive revolution, I couldn’t look in a mirror without scrutinizing my body.  I couldn’t go a day without feeling low about some aspect of my body, and I never, ever felt comfortable in my own skin.

The last few years have been a whirlwind for me, and for others, who have unearthed a positive self-love that previously evaded us: and, like Dorothy emerging into the Emerald City, we too were searching for courage and bravery.

Self-love is incredibly subjective, and only you are responsible for the relationship that you have with your body.  But at the same time, I attribute my acknowledgement of self-love to the many men and women that I have had the pleasure to interact with throughout my journey – My Plus Society.

Like a woman on a mission, my early 20’s were filled with reading, researching, and scrolling through social media and making connections with those of a similar mindset.  Before I knew it, I had become comprehensively involved in the body acceptance movement. The likes of Tess Holliday, Ashley Graham, Jess Baker and Virgie Tovar inspired me to question the ideas I held about my body and to acknowledge that body shame should be completely eradicated as a social principle.  These women were outspoken, influential and most importantly, visible.

I wanted to be a part of their tribe.

Far flung from the days when I was told that I was too fat to date, too embarrassing to be seen with, too large to be taken seriously – I finally found that integrating myself in this community gave me the courage and wherewithal to find my voice.  Not only this, but I began to develop a positive connection between my mind and my body that had so far been unavailable to me.

Cultivating My Plus Society was not difficult: and I don’t mean that I’m just so charismatic and charming that people just flock to me – don’t I wish!  But rather in the sense that there are so many women and men out there who held similar pre-existing thoughts to mine, who wanted to discuss these ideas, who wanted to overthrow these preconceived beauty ideals.  The community I so badly wanted already existed and soon, I had made powerful connections with people from across the globe.

But, as Dorothy encounters the Wicked Witch, I too encountered my own fair share of resistance.

The spaces available for the body positive community have grown in recent years.  Although we are making waves, these spaces are often met by an undercurrent of animosity.  I, and many others, are forever in a cycle of blocking and deleting unsavory messages about our bodies; how we are promoting obesity or how we don’t deserve our lives.

But that’s one of the perks of surrounding yourself with like-minded individuals – you have a support network.  You have a Plus Society that is so ready to be there for you, to lift you up, to encourage.

And then, then there’s the fashion.  Much of my teenage life was spent searching an area in a store the size of a postage stamp for clothes that I wanted to wear.  But, reluctantly, stores failed to realize this and I was relegated to wearing clothes that I HAD to wear, rather than clothes that I WANTED to wear.

So, shapeless, baggy and unfashionable outfits aged me and covered me up.  But, as the body confidence movement progressed, more brands have come out of the woodwork in support of plus-women and men.  The world of fashion suddenly opened its floodgates and we were no longer constricted to a small area at the back of a store.  Not only this, but many clothing brands in recent years have challenged beauty stereotypes and introduced things such as crop tops, jumpsuits and (shock) bikinis, to their plus-size ranges.

In hindsight, my bank balance probably doesn’t thank me for this, but it is so refreshing to find stores that put plus-women at the forefront of their campaigns.

Society+ is one perfect example of how a company can make the shopping experience so much more positive for a plus-woman.  Not only are they solely dedicated to women such as myself, but the clothing gives identity.  It is not reproduction, the clothing is not baggy, and they don’t promote covering up as a way to combat a larger body.  Rather, the fashion is innovative, forward moving and celebrates a plus-body.

All of this has had an unbelievable impact on my life.  I look back at the girl with ketchup and fries slathered down her coat and want to hug her.  I want to tell her that one day, she will feel as Dorothy did – but with one difference.  She’d never want to return to Kansas, and she’d never let things be as they once were.

Reminiscing about the 14-year old me from the beginning of this article, coat covered in ketchup and furiously blinking back tears fills me with heartache.  Not only for my misfortune at being subjected to such a thing, but also for the men who decided to taint a teenager’s memories with such horrible acts.  I pity those who find it difficult to understand that if a body doesn’t belong to them, then they cannot comment on that body.  And now, if I were to be subjected to such a thing once more, I know that I’d have the wherewithal to scoop off the ketchup and fries, and fling them right back at the haters.  Keep your chin up and stay sassy, ladies.

This article was originally written by me for the Society+ Blog, here.

There was an error retrieving images from Instagram. An attempt will be remade in a few minutes.