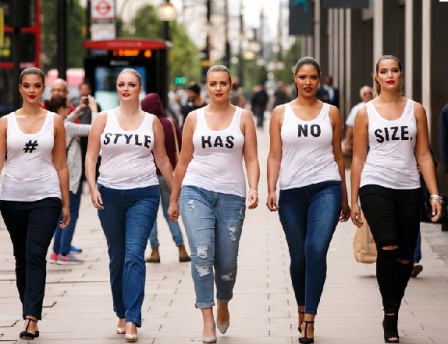 This is an article that I penned for The Independent, you can see the original here.

As a plus-sized woman I feel let down, underrepresented and seriously pissed off. A lot of negativity for a weekend I know, but I ensure you – it’s justified.

A real ripple of excitement went through the plus-size and body positive community this week as Evans, the clothing company for sizes 14-32, released their new campaign #stylehasnosize, claiming to be representative of all women.

With influential Instagrammers and plus size models such as Callie Thorpe, Georgina Thorne and Danielle Vanier under their belt, we were expecting great things from this campaign. However, as news of this release was broken to the plus-size community, the excitement shifted rapidly to disappointment.

In a world where fashion is becoming increasingly inclusive, one would have expected a company like Evans to pull out all the stops and accurately represent their target market. It wouldn’t even have been a particularly radical move considering how other companies now consistently to subvert standardised beauty ideals; Yours Clothing, who have pioneered Tess Holliday as their poster girl, Desigual, who have made vitiligo sufferer Winnie Harlow their frontwoman and disabled model Alexandra Kutas, who makes her modelling debut at Ukraine’s Fashion Week next week .

But Evans, disappointingly, have taken a severely lacklustre approach to diversity and completely missed a golden opportunity to make a prominent and progressive move for plus-size women.

Rather than pushing out all the stops and representing women ranging from size 14 up to 32 and from a range of backgrounds, Evans have instead chosen to promote a ‘socially acceptable’ (far closer towards 14) body type and size. Whether intentional or not, it seems despicable that they have deemed it appropriate to showcase women who simply appear to be carbon copies of one another.

The women Evans have featured, rather than promoting their notion that ‘Style Has No Size’, very much fall instead into the ‘One Size Fits All’ category. All are of a similar height, size and body shape. This isn’t the only problem; the majority are white and of a desirable age, which begs the question – where’s the diversity, Evans?

While the brand has always appealed to me in the sense that they produce great clothes for plus-size women, I can’t help but think that the marketing mistake they’ve made could be irreparable. In current society, you need to be radical and take risks to thrive. Evans have regressed to traditionally accepted cardboard cut-outs of the female aesthetic to front their campaign and this, simply, is unacceptable.

I’ll be surprised if the backlash dies down any time soon. The many women who shop at Evans and look to them for plus-size inspiration will feel let down and marginalised by a group who are supposed to make them shine.

They are not brave or radical, they are hiding behind what they think society will find acceptable and thus alienating the women that they claim to be representing.

Women don’t want to be mollycoddled, they want to see how real and raw fashion can be, and Evans, sadly, has completely failed them. When acknowledging the diversity that so overtly exists within the world and offering themselves as an ally to plus-size women, companies are essentially sticking two fingers up to society and the fashion ideals that have so far been sustained. If they fail to approach diversity in an open and inclusive manner, then it is their loss – not ours.