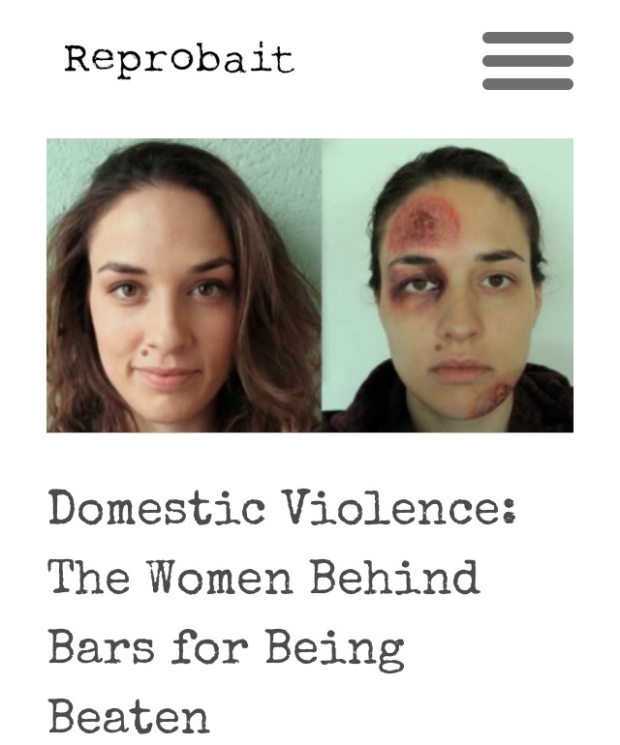 This was written by me for Reprobait magazine, the original article can be found here.

WOMEN’S AID STATES THAT ONE INCIDENT OF DOMESTIC VIOLENCE IS REPORTED TO THE POLICE EVERY MINUTE. JUST LET THAT SINK IN – ONE EVERY MINUTE. THAT MEANS, BY THE TIME YOU’VE FINISHED READING THIS ARTICLE, APPROXIMATELY 5-10 DOMESTIC INCIDENTS, OF VARYING DEGREES OF VIOLENCE, WILL HAVE BEEN REPORTED.

And that’s just the ones that get reported. That fact alone is utterly abhorrent, but when you take into account that on average two women a week are murdered by their partner or ex-partner, it becomes monstrous. There are millions of women living in fear in their own homes with ‘1 in 4 women experienc[ing] domestic violence over their lifetimes and between 6-10% of women suffer[ing] domestic violence in a given year’ (Council of Europe, 2002). The statistics do not highlight the horrors that these women endure – numbers can be brushed off and ignored. But when you realise that one of these four women could be your work colleague, a family member – even you – it begins to sink in.

These women are completely powerless to the patriarchal constraints that have become a norm in their everyday lives, but what happens when it isn’t just your safety you have to be concerned about? What do you do when you are responsible for the safety of a dependent child? Domestic violence isn’t just the preserve of the childless. It is absurd to believe that the conditions of a singular, highly personal experience of domestic violence is similar to the experience of another. However, when a child is involved, the experience manifests into something altogether different again. A mother’s instinct is to protect, but when you are unable to protect yourself against your assailant, what are you expected to do to ensure the safety of your children? What can the authorities, those who are allegedly there to protect the masses, do to ensure the safety of the victims, the sufferers, of domestic violence?

One woman who discovered the answer- in one of the most horrific ways possible, is Arlena Lindley. A harrowing case which had little coverage in the mainstream news, despite being a ‘grotesque injustice’, outlines the discrepancies and inhumane nature of the laws surrounding the punishment of mothers who have ‘failed to protect’ their children.

In October 2006, when Arlena Lindley’s friend Latricia Chance approached the apartment her friend resided in, she wasn’t surprised to see Lindley’s 3 year-old son, Titches, sitting outside eating cereal. A report stated that when Chance entered the apartment, she suspected something “wasn’t quite right” between Arlena and her boyfriend, Alonzo Turner, but aware that their relationship was tumultuous and violent, nothing was said. Turner then stepped outside, dragged Titches into the apartment and launched an attack on the small boy when he found that he had soiled his pyjamas. Threatening to kill Lindley if she intervened, the vicious attack resulted in the untimely and violent death of 3 year-old Titches.

Turner was arrested and sentenced to life in prison for murder. In spite of the valiant efforts she made to remove her beaten son from the apartment, Lindley too was arrested. Despite fleeting recognition of her suffering, she was sentenced to 45 years in prison for ‘failing to protect’ her son. The transcript from the court case shows Lindley’s lawyer bringing to light the abuse she suffered at the hands of Turner, ultimately declaring her a victim of battered woman syndrome, “…when you are a battered spouse or battered wife or battered girlfriend, then you are as much a victim of – – what I have got beside me is another victim of Alonzo Turner”.

The RAINN Organisation acknowledges that ‘battered women’ might not leave their abusive partners due to a number of factors; the primary reason is fear. Lindley was terrified of Turner, her Lawyer recognised that “[the abuse] has an emotional hold upon these individuals” and, more often than not, these women are powerless to escape from a relationship which is sequentially detrimental to their lives, or the lives of others – in this case, Titches.

This ‘child abuse by omission’ is the law that dictates these women be arrested, and sentenced to prison for failing to stop the aggressor. Some states include exposure to domestic violence in their legal definitions of child abuse or neglect due to its potential effects on children (Child Welfare Information Gateway, 2011c). “An unintended consequence of these policies is that parents who are domestic violence victims sometimes are charged with a type of neglect termed ‘failure to protect,’ despite circumstances that may have impacted the victim’s ability to prevent the child’s exposure to violence” (https://www.childwelfare.gov/pubs/focus/acts/). Therefore, by default, Lindley was sentenced to prison as a direct result of the heinous crime her boyfriend committed – but she is not the only woman who has suffered this cruel fate, Buzzfeed’s investigation into similar cases identified 28 mothers in 11 American states who were imprisoned for, ultimately, failing to protect their children. This law is penalising broken women and, as seen in the Lindley case, ignoring their experiences of domestic violence and the inability to safely leave that relationship.

Another woman who has fallen victim to this injustice is Tondalo Hall. A woman sentenced to 30 years in prison, while her abusive partner, Robert Braxton Jr., served a mere 2 years for causing extreme injury to their two children. The children, only 20 months old and 2 ½ months old suffered multiple fractures at the hands of Braxton who defended himself by stating that he “became frustrated [whilst changing a nappy] and used too much force against [the child]” and admitted that he was aware that the force he was using was too much for a baby. Hall, the mother and primary carer of these children received a sentence more than 15 times as long as Braxton’s – for not doing anything. The court transcript shows Hall stating that, “I caused injury to my two children… by permitting Robert Braxton Jr., my children’s father, to hurt them seriously… and then by being afraid to immediately seek medical treatment for my children”. Hall’s fear was readily justified, Braxton put his hands around her throat and choked her, however, when this testimony was put to the court, the judge dismissed it, stating that, “it didn’t pertain to Braxton’s child abuse crime”. Once more, the abuse that she withstood was disregarded – in light of this, her Lawyer offered a statement reflecting this injustice, “…you heard testimony that the jury was supposed to disregard the abusive relationship that she was in. She was being punished back then as well. And it was a bad choice. There are men out there like that”. In spite of this recognition, these women remain not only under the thumb of their partners, but under the thumb of a justice system that does not protect them.

Buzzfeed’s investigation highlighted that “only a few states provide an exception for parents who feared for their safety at the time the violence occurred… Prosecutors often use the violence a mother endured as evidence against her… She should have left the relationship, taking herself and her child to safety”. But these laws fail to acknowledge that the attacks on these women are not a one-time occurrence – rather these women have been the victims of physical and mental abuse for months, even years at a time which would understandably warp and thwart any perception of reality. The justice system is rooted in the believe that, for these women, it is simple to walk out of the door with no repercussions. Judith Lewis Herman, a teacher, author and women’s rights advocate states in her book Trauma and Recovery (1992) that “the guarantee of safety in a battering relationship[…]must be based upon the self-protective capability of the victim. Until the victim has developed a detailed[…]plan and has demonstrated her ability to carry it out, she remains in danger of repeated abuse.”

The case of Kimberly Biggerstaff demonstrates these atrocities further. Her 4 year-old daughter died as a result of the  injuries she suffered at the hands of her partner, Rico Benitez. Benitez beat the child so severely that her colon ruptured, causing widespread inflammation in her tiny body – he pleaded guilty to second-degree murder and was sentenced to 15 years. But Biggerstaff, the vulnerable and damaged mother, received an initial sentence of 20 years (which was then lowered to 17). When the man who murdered her child is released from prison, she will still have 2 years left to serve. Where is the justice in that? Ed Miller, Biggerstaff’s representative noted, “Kimberly Biggerstaff allowed [Benitez] to stay at her home because she was under almost complete domination by the man”. There were a number of witnesses to verify the violence and persecution Biggerstaff suffered at the hands of Benitez, Benitez’s own sister said that she ‘saw him assault Biggerstaff because the child was crying’.”

Biggerstaff was undoubtedly failed by the law and systems that are in place to protect women against domestic violence clearly were not available to her. A defence motion states that Biggerstaff was ‘under the duress and control’ of Benitez, who ‘severely’ abused her both mentally and physically. So what could she have done?

Buzzfeed’s investigation concluded that the criminal justice system is “scapegoating domestic violence victims in order to cover for its failures to properly investigate and prosecute instances of child and intimate partner abuse.” And we’re inclined to agree. So why is nothing more being done to help these women who are trapped in a helpless situation? Why  are law enforcers waiting for despicable crime to be committed before they take action? Why are the sentences these women face so excruciatingly long -sometimes even longer than if they had abused a child themselves?

Cases of this sort often fall under the radar; only anti – domestic violence organisations and independent groups are fighting for the justice of these women and representing them in the face of adversity. But even that kind of support falls short– many women’s refuges are forced to turn away women who have escaped these situations due to a lack of funding. In spite of that, Tondalo Hall is currently seeking clemency and UltraViolet a women’s rights group, has started an online petition urging for her sentence to be reduced. For Arlena Lindley, whose case has received little media coverage, state laws remain unchangeable.

Many of us are appalled by the things that these women are subjected to – not only are they abused physically and mentally, but their children have been injured or killed at the hands of a partner they could not escape. Then, as a result of fear, poor judgement and inability to extract themselves (and their respective children) from a formidable environment, they are imprisoned – instead of helped.

These women, plus the many unreported cases of domestic violence are the wronged. They are the ones who suffer; firstly they are imprisoned by their partner, then they get the luxury of feeling the cold bars of jail when incarcerated – where’s the justice in that?