For a long, long time now I have adored burlesque. Not just for the incomprehensibly beautiful women

– although I don’t mind them, or course – but for the glamour, the tease, the mischief, the music, the movement, the art of it. Obviously, as a lesbian, I love burlesque for the beautiful women too, but that’s not what it’s all about. In the 21st Century you’d be hard pushed to find someone who knows what the differences are between burlesque and stripping. More often than not, the two are categorised in the same bracket, but I believe burlesque requires far more of someone, more of the audience, than stripping does. Above all, burlesque needs your…

When frequenting the seedier areas of (for arguments sake) London, you’ll undoubtedly be faced with neon lights and sex toys galore, attempting to entice you into their warm, fluorescent arms. It comes with the territory to expect this in the depths of a big city. Another thing that doesn’t go unnoticed, is the popularity of strip clubs amongst men – understatement of the century, I know. My point is, a strip club leaves nothing to the imagination; thus suiting the (majority of – I don’t want to generalise and get on the wrong side of you fellas out there) male population. All they have to do is sit there and watch a sexy woman remove her clothes to a practised routine, be entranced by boobs and part with their well earned cash

. Strip clubs know their stuff, this is why they are so successful. A large sample of men don’t have a finely tuned imagination when it comes to women, they aren’t necessarily fussed about soft lighting, a carefully selected melody or thoughtful outfits – they want tits and arse and they want it now. This is where burlesque comes in, and this is where burlesque is more woman-friendly.

A burlesque show is glamorous and fun. Not smutty glamorous either. They put thought into their acts; effective lighting, a suitable tune, feathers, sequins, lace, leather, rubber… all of this appeals to women

. It is a sensory overload that even a straight woman

would find hard to resist. Not only this, but burlesque leaves a little to the imagination. Women like to invent, suggest, and fill in the blanks, so when attending a burlesque show and the stunning woman removing her clothes does not in fact remove everything, a sense of speculation is there.

Many people don’t realise that burlesque originated in the Victorian era and originally, it took the form of a ‘panto-esque’ kind of show. If you’ve been to a pantomime above the age of 16, you’ll know that there is slapstick for the kiddies, and slyly placed innuendos for the adults. Burlesque shows often took the form of singing and dancing plays. In time however, these shows evolved and, as America took hold, there was a larger focus on the figures and aesthetics of these singin’ and a dancin’ ladies. Soon burlesque became a favourite of the US of A, whilst thankfully retaining its level of comedy. I have faith in my belief that burlesque has survived for so long because of its comedic nature. It doesn’t take itself too seriously, and therefore is accessible to both men and women of any sexuality. It isn’t surprising when watching burlesque to see a woman balanced seductively in a martini glass (a la Dita Von Teese), or playfully popping balloons that adorn their bodies. It’s just fun. 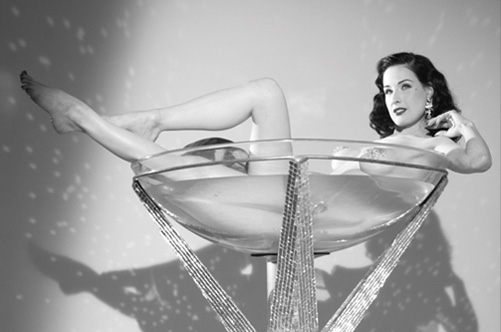 Many women find burlesque approachable. The dancers found in strip clubs are often slim, preened to perfection, and wearing cheap outfits. Burlesque allows women of all shapes and sizes, with tattoos and piercings – women outside of the ‘norm’, to be in the limelight. You’re as likely to find a plus-size beauty peeling a corset from her curves as you are a 1950s bombshell shimming out of her pencil skirt.

Burlesque is friendly, there is mystery there. Rather than half-heartedly swinging around a pole, these ladies are enjoying what they do. They have the freedom within burlesque to express themselves without the added pressure of exposing themselves to the drooling audience. The audience is allowed to guess what the lady’s skin looks like, we’re allowed to guess what her face looks like when she removes her clothes. Most of all, we’re allowed to guess what she is thinking as she saunters off of the stage in nothing but a pair of stilettos; rather than knowing that she just wants our money and she wants it now.