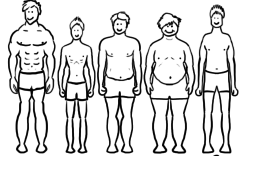 The body positive community, by and large, is dominated by women. It only takes a quick search on social media to find a diverse array of women expressing the love they have for their bodies in one way or another – as someone fully invested in this community, I think that this shift in perspective of body image ideals is a phenomenal movement, and one that is well overdue. Thanks to a vast number of women chipping away at the mainstream where body image is concerned, we are slowly but surely conquering these important societal issues. But women aren’t the only ones who are fighting for their voices to be heard – in a society that pervades the air we breathe with misogyny, the body image crises that men face are too often overlooked.

Some of you ladies reading this may sigh, thinking “welcome to our world”, and whilst I agree that us women have borne the brunt of body image issues for most of our lives, that doesn’t equate to the experiences that men have being dismissed. Women are afforded the luxury of having plus-sized role models in abundance, we have successfully broken the modelling world, we are challenging perceptions and changing lives on an every day basis – but men, sadly, are rarely afforded this luxury. For where do they look for their fuller-figured male inspiration? Where do they go for a true, honest representation of their bodies? Not the media, that’s for sure.

It has almost become second nature to see an oiled, sculpted, preened man gracing the covers of a men’s magazine, on television caressing a bottle of aftershave, or showing off his sizeable package to advertise a pair of boxers – men are not robots, and it would be foolish to assume that they are unaffected by the ‘ideal’ male aesthetic that is presented to them. Not only this, but living in a society that is heavily governed by gym culture, bulking up and where gaining is ‘in’, anything outside of this becomes discounted as many men are expected to uphold a physique that even Michelangelo’s David would be jealous of. Male culture is rife with demands to “man up” or “be a man” and all of this undue pressure to conform to what maleness means in society’s eyes can be detrimental to an impressionable boy, or man, with low self-esteem.

Men, as much as women, are privy to the negative body ideals that are presented to us on a daily basis, but the generalised perception of men is that they need to be tough, to craft a sense of manliness, compete and achieve the male aesthetic that society dictates. Kelvin, menswear blogger and body positive model at @notoriouslydapper believes that “guys are under looked in the issue of loving their bodies due to the simple fact that guys don’t talk about it much. And when they do they are scared of being judged or being looked at as weak”. Whilst I understand that body positivity is subjective and you can choose to love your body as publicly or privately as you wish, the sheer volume of body loving women and the lack of openly body positive men on social media, just goes to show that this is a problem that needs to be addressed.

It appears that men are a whole lot more clandestine where their bodies are concerned. Where women are promoting the love they feel for all body types, it seems that the majority of men look upon gym bods more favourably than anything else, and if a man isn’t ‘in’ with the gym subculture, then they are not acceptable in society’s eyes. The self-esteem and mental health issues that men battle are often subjugated, because men are expected to champion strength, bravery and the ability to battle their demons without cracking their armour – but that’s not always the case. The spaces available for men to be honest about their bodies is limited, and this needs to change – because when you listen, when you really take notice – as plus-sized icon Dom Clark says – they too “just want to scream their agenda’s back at the haters like a banshee of positivity”.

One thought on “Body positivity is for men too…”