The logistics of movie making are beyond me, but as a film lover there is a startling fact apparent that I can’t not blog about for much longer. I am well versed in the genre of rom-coms and romantic dramas, some of my favourite films even fall into these categories, but I’ve come to notice something. And its been bugging me. Where is my representation? Where are all of the fat characters in love? When films approach the subject of fatness, it is never genuine, raw or real. That’s not to say that films don’t give fat men and women some visibility, it’s just the wrong kind. For both male and female fat characters, the road from opening titles to closing credits is tumultuous, more so when the subject of love is the focal point of their story.

I take umbrage to the idea that fat men and women can’t fall in love before losing weight first. Many films tend to follow the same structure: a fat character is overlooked by the object of their affections, said fat character loses weight, and then gets the girl/guy. 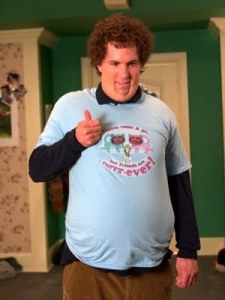 Take the character that Ryan Reynolds plays in Just Friends, Chris Brander. As a teenager, Chris is hopelessly in love with his (blonde and slim) best friend Jamie, but Jamie blindly continues their friendship – until they meet some years later and Chris has had his braces removed and shed the weight that he carried. Then she’s interested, funny that. Similarly, Renée Zellweger’s portrayal of well-loved screw up, Bridget Jones, focuses intensely on Bridget’s desire to lose weight and get the guy (all whilst just toeing the line of curvy, I hasten to add). It would be refreshing to see a fat character in love – not in spite of their size, but regardless of it.

Shallow Hal and Hairspray, although to be applauded for their attempts at subverting the stigma surrounding fat relationships, still make some mistakes. Rosemary, Gwyneth Paltrow’s fat-suited character, is ridiculed, bullied and demeaned throughout, until Hal (played by chubby favourite, Jack Black) finally sees her size and overcomes cultural obstacles to fall in love with her in spite of her size. Not a million miles away from this, Tracy Turnblad in Hairspray, smashes through social stigma to become a dancing sensation – oh, and she gets the guy. These films, in my eyes, are pioneers of fat character acceptance: but they still fixate on the size of their fat characters as an entity to overcome, something that has to be acknowledged, discussed and conquered first.

When a fat character is not at the centre of a love narrative, but appears as the ‘token fat character’, they often fall into two categories.The Parody: plus-size favourite, Rebel Wilson, is seen in Pitch Perfect as Fat Amy.

Come on, do I really need to explain why this is a bad move for fat character representation? I’m all for progression and acceptance where the word ‘fat’ is concerned, but when a character is literally defined by their size so obviously, it becomes somewhat absurd. The Manly: comedic genius, Melissa McCarthy, is often at the pinnacle of this category. In Bridesmaids, she plays uncouth and grotesque Megan, in button-down plaid shirts, with no make-up and ‘slacks’, she is presented as a caricature of a fat woman. We see Megan flirt obscenely with most men that she comes across, to no avail, she is meant to be seen as an unattractive joke for her slimmer counterparts to pick fun at.

Sometimes, fat characters are expected to accept this representation for the sake of comedy. The Inbetweeners is non-PC lads ‘banter’ and we are expected to excuse the fun poked at those who are not privy to mainstream acceptance – fat people included.

When crude Jay falls for fat Jane, he hides behind his emotions by bullying and demeaning her publicly, before subsequently reconciling with her when he realises how he really feels. There is so much wrong with this fat relationship ideology that I don’t know where to start: after being fat shamed, the character of Jane willingly accepts a relationship with Jay. If an impressionable fat man or woman saw this presentation of fatness, they would take only one thing away with them: that it is okay to embark on a relationship with someone who thinks it is okay to bully you, because that’s all you’re worthy of.

I want to see my happily ever after, Hollywood.

3 thoughts on “Where are the plus-size happy endings?”