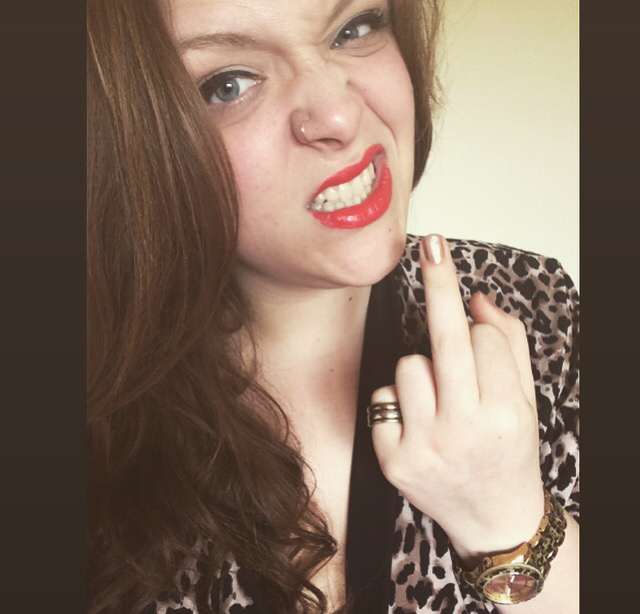 Last week I dared to speak out. I know, who’d have thought it… a fat girl even contemplating the thought of speaking out and standing up for her body – but I did. As any fat girl will know, this takes a lot of courage: if you’re anything like me you’d have been bullied throughout your years and confronted many a demon in your time, but in spite of these demons, I’ve managed to find peace with my body and the way that I look. I owe a lot of my newly discovered confidence to the likes of Honour Curves and Tess Munster – hashtags such as #honourmycurves and #effyourbeautystandards have given plus size, curvy, big fat babes the space to find acceptance of their bodies. Sadly, some people have taken a disliking to this fat positivity and have taken to slandering these hashtags – I myself have been no exception to this trolling.

I recently uploaded a photo that struck a nerve with the fat haters out there and I was met with a tirade of abuse. I was told amongst other things, that I was unhealthy, heading to an early grave, disgusting and, originally, I was called a ham beast. As I pointed out to my perpetrator: if I’m what a ‘ham beast’ looks like… then I’m ok with that. Now these trolls, in their ignorance, have standardised and appropriated a set of ‘rules’ that they seem to think applies to us plus sized goddesses… In light of this, I thought I’d tackle the problem and nip it in the bud to prove that ‘rules’ are made to be broken. So listen up, because here are my top fat girl misconceptions…

You’re fat, so you MUST be unhealthy!

Sorry, not true. As much as you try to convince yourself that ALL fat people are unhealthy and close to their deathbeds – you’re wrong. Fat people can be fit and healthy, your ignorance on this subject just goes to show that 1) you’re uneducated, or 2) you’ve been so taken in by the media’s representation of fitness as having a washboard stomach and bulging biceps that you forget that health comes in a whole plethora of forms. I practice yoga 3 times a week… And haters, I challenge you to successfully hold crow pose without falling on your face.
You can’t possibly be happy with your body!
Many fat women, myself included, love the lumps and bumps that cover my body. So we can love our bodies, and fuck you if you think you can change that.

Fatty, ham beast, pig, fat bitch – insults will make you hate yourself!
Wrong. When uploading photos of ourselves, do you not think that us fat ladies preempt comments such as this? We’ve heard them all, and taken them proudly on the chin… Yes we are fat, well done for noticing! The word ‘fat’ is being reclaimed as a positive entity, and no amount of fat shaming names are going to change that.
The way you feel about your body is governed by MEN!
No, no, no. When I uploaded a particular photo of myself, it was suggested to me that I couldn’t be happy with myself because no man would want me. Um… My body positivity has nothing to do with any man, woman or anything in between! (Besides, I’m a lesbian, so I definitely have no want, need or desire for a man to find me attractive)! It comes from within, my body is mine, as are the thoughts, feelings and emotions attached to it.
Being fat is the worst thing in the world!
Again – completely incorrect. I’ve been told that I’m destroying the world with my size, that my obesity is detrimental to the ENTIRE population. Sorry, but there are a million things going on in the world that are worse than being fat, trust me.
Body positivity doesn’t aim to shame fat people, but support them in a world where everything has, so far, been against us. Some of us might be on the verge of accepting our curvy, fat, voluptuous bodies; some of us might be completely indifferent to our fatness, and some of us might be entrenched in body positivity. Wherever we are in our journey, these rules are out there to harm us, but fat women need to reclaim them and banish them – we’re proud, and fuck you if you try to stop us.

4 thoughts on “We’re Fatty Boom-Booms, Let Us Tell You Something… ”